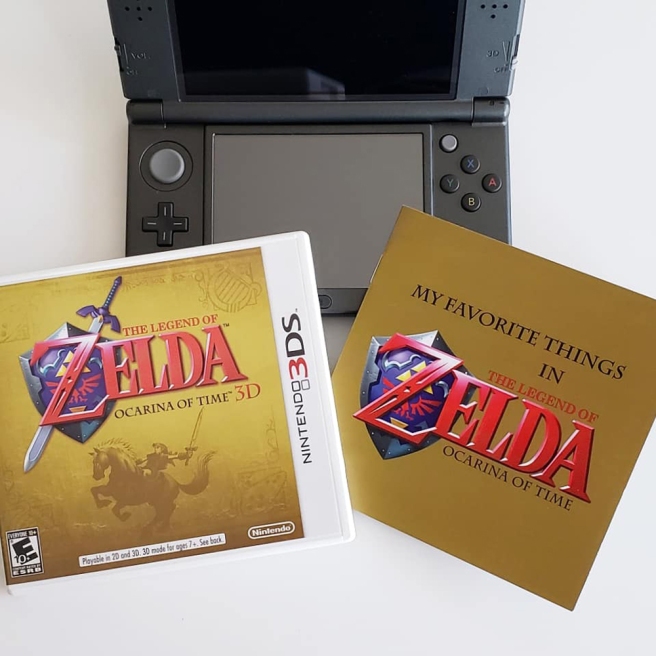 This is a small zine I made to express my appreciation for some of the more interesting things in Ocarina of Time using graphics and screenshots from the game itself. It’s eight pages long and 4.75″ x 4.75″ (roughly the size of a Nintendo 3DS box).

It took me about four hours spread out over two days to make this zine. On the first day, I spent two hours collecting screenshots and other graphic elements like text boxes and fonts. On the next day, I spent another two hours creating the front and back covers, laying out the pages, and writing the text. My previous zines took weeks to put together, so I wanted to challenge myself to make something short in a limited amount of time.

I also made this zine to have something small to sell for $1.00 at the DC Zinefest this summer. I sold almost all of my copies at the event, and I put the remaining copies in my shop on Etsy. I think it’s probably fair to say that there are a lot of people who love the Legend of Zelda games, and it’s been fun to use this zine as an excuse to meet and talk with other Zelda fans in person and online.

What the experience of making this zine taught me is that it wouldn’t be that difficult to make something like a fake game manual that looks fairly official. What this means is that, at my current Photoshop skill level, I could make something that looks almost exactly like the official game manual for Ocarina of Time but provides “instructions” for an entirely different version of the game. For example, I could make a manual for a game in which Princess Zelda is the protagonist or a game in which it’s the player’s goal to capture and tame various monsters. I could also (very easily) reframe Ocarina of Time as a dating sim. The possibilities are endless, really.

In the future, I think it would be fun to do a similar zine about my favorite things in The Wind Waker. It might be also cool to create a fake Wind Waker game manual written from the perspective of Ganondorf, who wants the hero to stop mucking around and bring him the Triforce already. I’m planning to start work on an actual book about The Wind Waker soon, and making these two zines might be a good way to keep the project exciting and interesting.

Reader of books and player of games. College professor and pokémon trainer. Writes about Japanese fiction, media, gender, and society. In love with monsters and magic. https://digitalfantasydiary.com/ View all posts by Kathryn