I’m honored to have an essay in one of my favorite online magazines, Cosmic Double. “A Monstrous Little Mermaid Story” is about how I discovered the joy of queer transformations in HP Lovecraft’s “The Shadow over Innsmouth.”

“A Monstrous Little Mermaid Story” is free to read on the Cosmic Double website here:
https://cosmicdouble.com/2023/01/08/a-monstrous-little-mermaid-story/

I originally created this essay as something of a writer’s statement for a short story called “Don’t Eat the Fish.” The story is about the uncanny space at the intersection of queerness, disability, and economic precarity, but I also think it stands on its own as an unsettling work of body horror. I workshopped this story for years as I slowly developed my skills, and I worked hard to polish the narrative voice and sharpen the genre effectiveness while also being as honest as I could about the nuances of my own personal experience.

I generally try to keep overt identity politics out of my writing, which isn’t a value statement as much as it is a personal preference. It’s not as though my stories aren’t informed by my identity or social environment. Rather, both my identity and my environment constantly shift and change, and my stories generally aren’t about myself to begin with. Still, because this particular story was so strongly informed by my positionality, I spent more than a year submitting it a series of literary magazines dedicated to raising the voices of queer, disabled, and economically precarious writers.

Unfortunately, every single magazine I submitted the story to was like, “Oh damn, that’s truly upsetting, and this story is not Positive Queer Representation™ enough.” Usually, when I have a story rejected, I’m lucky enough to get a personal note from an editor along the lines of, “This isn’t a good fit for us right now, but we all enjoyed this piece and would love to see more work from you in the future.” With this story, the response was inevitably: NO.

I therefore wrote this essay as a way of processing what my story and its literary influences meant to me. I’ve long since accepted that the story itself will never be published, but I’m truly grateful to Cosmic Double for being willing to publish an essay that may not be Positive Queer Representation™ but still attempts to represent what I believe is a very real aspect of nonbinary (and trans!) queer identity. That takes courage, and the essays I’ve been reading on the site led me to believe that the editors are open to an earnest investigation of what it means to feel “monstrous.” If you’re interested in well-crafted essays from unexpected points of view, please check them out!

I recently had the honor of writing a review of Ashley Robin Franklin’s graphic novella Fruiting Bodies for the website Women Write About Comics. Here’s an excerpt:

Franklin joins Silvia Moreno-Garcia and Jeff Vandermeer in the pantheon of contemporary writers and artists who have celebrated the uncanny invisible world that stretches deep below our feet and proliferates in the warmth of our bodies. Classical botanical horror has its roots in concerns over cultural hybridization, but Fruiting Bodies resists the genre’s Victorian anxieties in favor of a probing exploration of the primal fears surrounding the collapse of bodily autonomy. In the end, Franklin suggests, human social distinctions of gender and sexuality are meaningless to a natural world that devours everyone equally.

You can read the full review (here), and you can find the book’s page on Silver Sprocket’s website (here). You can follow Ashley Robin Franklin on Instagram (here), and I also recommend checking out her other short comics on her Etsy store (here). As always, I want to acknowledge the good work of my patient and brilliant editor, whom you can follow on Twitter (here). 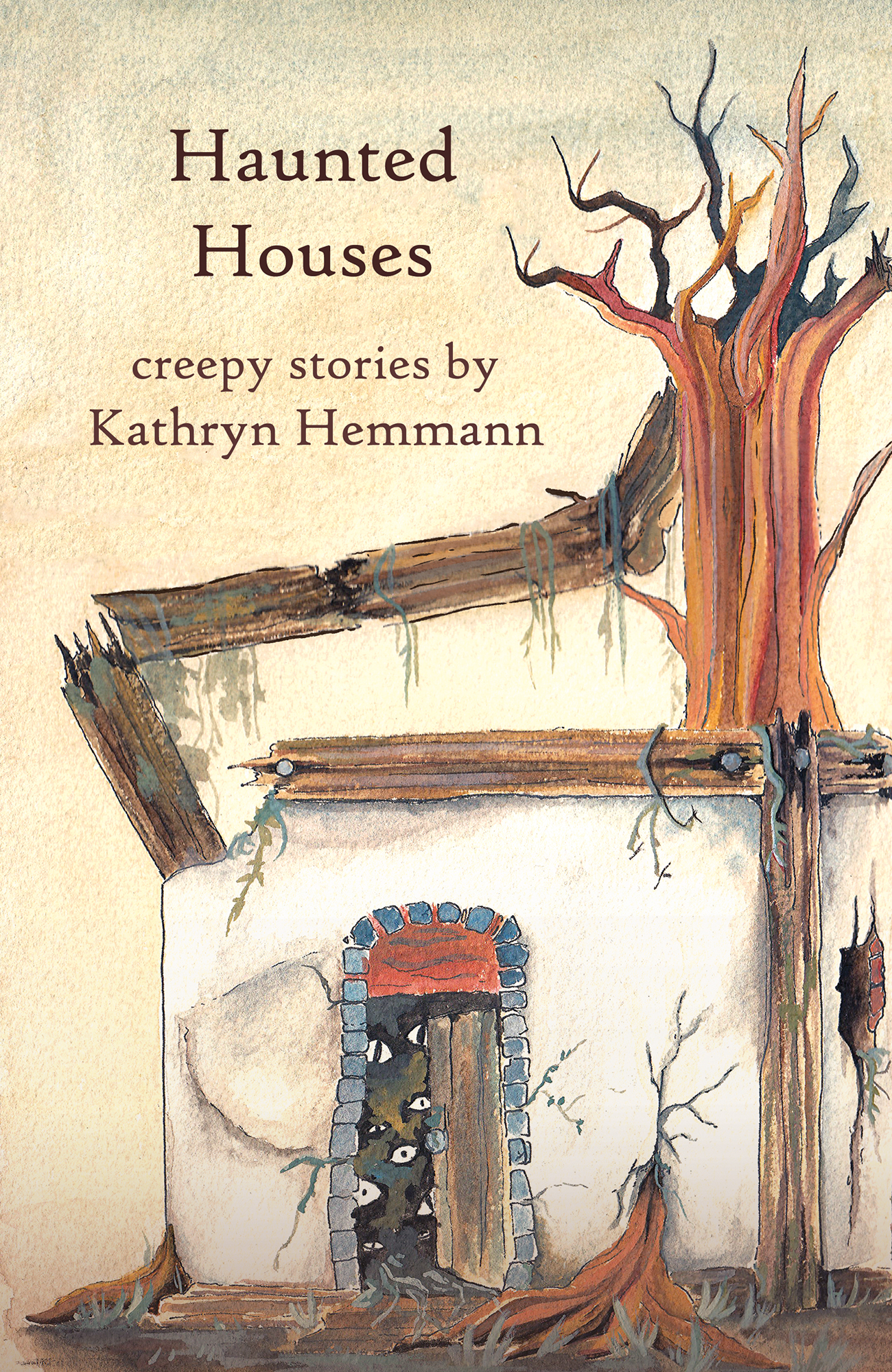 Earlier this week I published my newest zine of horror-themed microfiction. Haunted Houses contains fifteen very short stories about haunted spaces and the terrible people who inhabit them. The cover art is by @QuinkyDinky, and the zine contains interior art by @irizuarts. I’ve got a listing up on Etsy (here), and I’m also promoting the zine on Twitter (here) and Instagram (here).

This zine is quite short, with each story and illustration occupying only one page. This is partially a trick of formatting, but it’s also a result of careful editing. You wouldn’t want to spend too much time in these places, after all.

I have to admit that, even though I’m categorizing this zine and the two other collections of microfiction that preceded it as “horror,” I’m on the fence about what genre my stories actually belong to.

In my mind, the genre of horror isn’t about a specific set of tropes or narrative structures. Rather, horror is characterized by the psychological and visceral sensation of unease it inspires.

I personally prefer to think of most horror, including the stories I write, as “dark fantasy,” or perhaps simply “magical realism.” I’m not easily creeped out by fiction, mainly because the real world is so lowkey awful so much of the time. As I write this, the National Guard is setting up base at a West Philadelphia Target in advance of the presidential election next week, ostensibly as a “defense” against people engaging in civic protest. There are actual tanks in the parking lot of the place I go to stock up on toilet paper, and that’s really scary. But monsters? Not so much.

I’ve always tended to identify with monsters, and not simply because so many villain characters are overtly coded as queer. Monsters are about disrupting the status quo, and I can get behind that. Postwar American horror cinema, including the slasher films of the 1970s and 1980s, is all about interlopers quietly invading small-town America and infecting people. The story behind many of these movies basically boils down to this: Can you even imagine scary things like communism and feminism and civil rights secretly gaining a foothold in our town? (Stephen King goes into fantastic detail about this in his 1981 book Danse Macabre, if you’re curious, and I think the book still reads well and holds up in many ways.)

To me, monsters aren’t scary because I am the monster, which is an uncomfortable set of life experiences to try to talk about in fiction or otherwise. There’s nothing you can specifically put your finger on regarding why people treat you the way they do, but you know there’s something a little off.

Fuck Sigmund Freud and his weird misogyny and homophobia, but I think I’m on the same page with him regarding “the uncanny” as one of the primary components of horror. Freud got a lot of things wrong in his career, but something he gets absolutely right is that it’s difficult to discuss the uncanny in concrete terms.

The uncanny doesn’t just apply to appearance, of course – social interactions and environments can be uncanny as well. If what I’m writing is horror at all, it probably falls into the subcategory of social horror, which focuses on people behaving in a way that’s almost human, but not quite. Many horror stories are cathartic, in that the status quo is threatened but ultimately restored at the end. Even if things have changed, we can feel relief in the knowledge that at least they’re getting back to normal. With social horror, however, our anxiety is never resolved, because we now understand that the status quo itself is horrifying.

It’s difficult for me to talk about the details of my identity and life in a mimetic way. When I’ve tried, it’s been my experience that people either won’t believe me, will think I’m being manipulative in an attempt to elicit undeserved sympathy, or will be put off by the political elements underlying my descriptions of the ways in which I’ve had to move through the world.

The point of the stories in Haunted Houses is not to try to explain why certain aspects of my life have been unsettling, but rather to create a sense of the uncanny in order to communicate the sense of feeling unsettled for reasons you can’t quite explain. Sometimes my stories about haunted houses are about the hidden trauma of being queer in a society that goes out of its way to create monsters; but, in the end, I just really like telling stories about strange people occupying uncomfortable places. I enjoy exploring these themes both as a reader and as a writer, and I’ve found that summoning the courage to open the door and peer into the darkness on the other side is, if not total escapism, still good spooky fun.

And right now, at this specific moment in time, I think we can all relate to the uncanny experience of feeling trapped in a haunted space, because this is our daily life – we live here now.