I saw a screencap of (this tweet) circulating on Tumblr after watching the recent teaser trailer for the Breath of the Wild sequel, and this is where my mind immediately went. People in the Legend of Zelda fandom say that they want “hot dad Ganon,” but be careful what you wish for!

I’d like to extend my sincere gratitude to Frankiesbugs for putting up with my awful dad humor and drawing this silly comic. You can find more of the artist’s cute and creepy comics and illustrations on Instagram, on Tumblr, and on DeviantArt.

After Nintendo premiered the new Breath of the Wild sequel trailer during E3, all sorts of artists rushed to draw illustrations of the mysterious hero in the sky, but all I can think about when I see these handsome young men is how Link canonically eats bugs. In this house we love our feral son, and I couldn’t resist drawing the Ponyo meme. 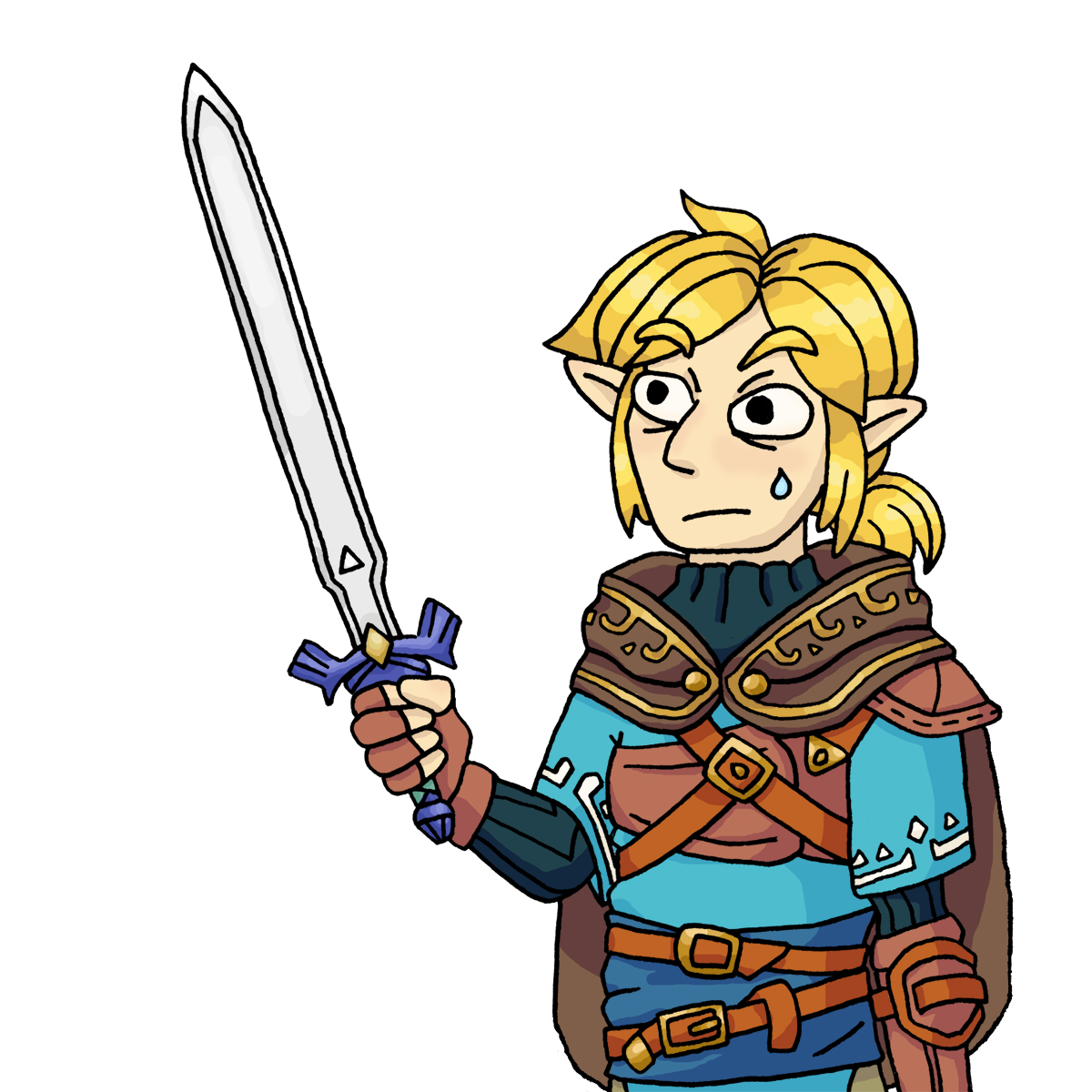 Everyone deserves to be cute in the Breath of the Wild sequel!

(The above illustration is by the amazing @mehkuno on Tumblr.)

In my writing logs, I keep mentioning the fanfic novel based on the Breath of the Wild sequel trailer that I’m writing, so I thought I’d try to describe the project. Here goes!

Story
When the long-dormant Guardians begin attacking Hyrule, Zelda, Link, and Ganondorf go underground to try to find the source of energy powering them.

Background Setting
This is an urban fantasy set in a modern-day version of Hyrule based on New York City. In this setting, the cave that Link and Zelda are exploring in the BotW sequel trailer translates to the sewer tunnels underneath the old site of Hyrule Castle, which has been converted into government offices. Everything that happened in BotW took place about three hundred years prior to the present day, but all mentions of magic, the Triforce, and the true nature of the Calamity have been erased from history. Ancient technology is exhibited in museums, but people treat it like art and have no understanding that it’s actually machinery. When the Guardians and other artifacts of ancient technology start going berserk, no one knows what’s happening.

Zelda (visual reference)
Although she comes from a powerful political family, Zelda is interested in the history and functionality of ancient technology. She’s 26 years old and about one or two years out of a Master’s program in Chemistry. She wants to get away from her family’s influence, so she currently works as a lab technician. Her intention is to succeed through her own efforts while pursuing her research. She was reserved and uptight when she was younger, but her relationships with Link and Ganondorf have helped her to become braver and more self-confident.

Link (visual reference)
He works as a courier for a delivery company, and there’s nothing he loves more than driving around Hyrule on his motorcycle. He’s into urban exploration and has a hugely popular account on Skyloft (Hyrule’s equivalent to Instagram). Like Link in BotW after he’s lost his memories of being constantly under pressure, this Link is easygoing, clever with his words, and a lot of fun to be around. He’s a year older than Zelda, and he gradually becomes friendly with her while making deliveries to her lab. As Zelda discovers odd inconsistencies regarding Hyrule’s history and technology, Link corroborates her suspicions by offering evidence of the strange things he’s seen with his own eyes in some of the city’s more out-of-the-way places.

Ganondorf (visual reference)
He works at a prestigious investment firm that specializes in technology. He’s only around thirty years old, but he’s inhumanly good at what he does and has managed to become extremely wealthy. Unlike Zelda and Link, Ganondorf was never in doubt that magic exists, mainly because he himself is a powerful wizard who is able to control both hardware and software. He knows what ancient technology is and what it can do, and he’d like to figure out a way to make it profitable. When his path crosses with Zelda’s, he becomes interested in her research, and he inadvertently becomes friendly with Link in the process. He’s an intense and unpleasant person, but being with Link and Zelda mellows him out and helps give him a sense of humor and perspective.

I’m afraid that I may have misrepresented this story as a lighthearted adventure. It’s a psychosexual melodrama with some fairly dark themes.

Link is smart, hard-working, attractive, and charming, but he doesn’t come from privilege, so he’s been jumping from one pointless temp job to another. He does good and interesting work on social media, but he can’t monetize it, which makes him bitter. He doesn’t feel as though he’s allowed to express negative emotions, though, so he comes off as fairly shallow. Later in the story he is going to snap and go feral.

Zelda was horribly abused as a child by her family, who tried to use psychiatric medication to control her. She represents a conflict between science as an incredible driving force of civilization and science as a means of social control, but she’s also my vehicle for working through my own experiences with how I’ve been dehumanized by the mental healthcare industry.

What’s going on with Ganondorf is something of a spoiler, but it’s distinctly unpleasant. On top of some Akira-style body horror, he’s an immigrant in a country where there’s a distinct possibility that the police could arrest (or even murder) him for no good reason. Even though he has an excellent grasp on human psychology, he sees empathy as a luxury he can’t afford, and the way this mentality influences his behavior toward Zelda can be creepy and uncomfortable.

I don’t openly talk about mental illness, but Zelda and Ganondorf are both coping with intense trauma. Neither of them is mentally “healthy,” and I don’t clearly signpost their toxic behavior as such. There’s no violence or angst or abuse for the sake of being edgy, but there’s not a lot of healing. Their character development goes from “bad” to “bad in a different way,” with “empowerment” being an unhealthy but necessary response to horrible circumstances.

When I started writing, I told myself that I would allow this story to become as dark as it needed to be, and it has gone to some places. 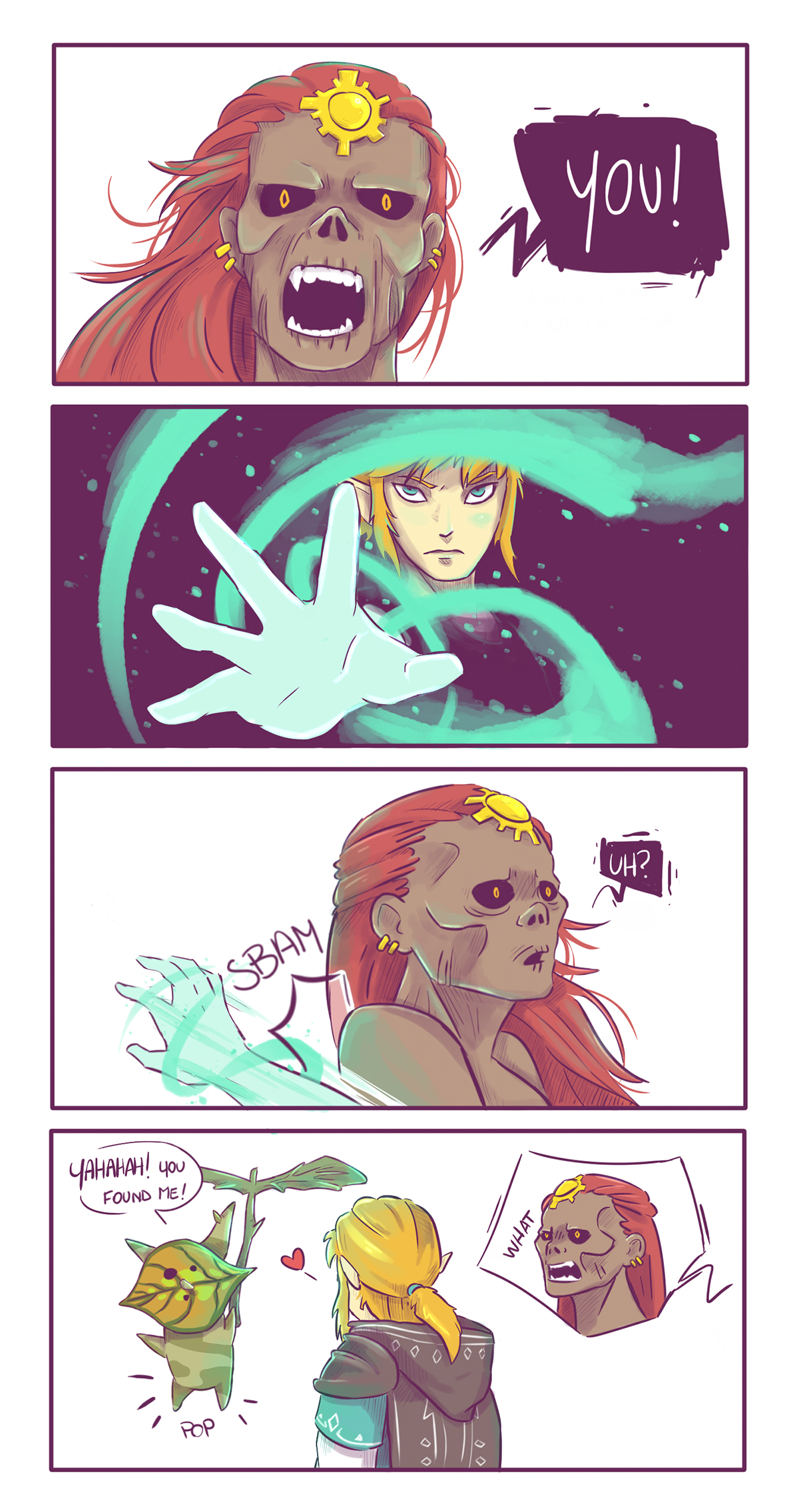 This comic was drawn by Frankiesbugs (@frankiesbugs on Tumblr) and written by me, Kathryn Hemmann (@kathrynthehuman on Twitter).

After three years of playing Breath of the Wild, I now see Korok hiding places everywhere… and I mean everywhere. (ಠ_ಠ) 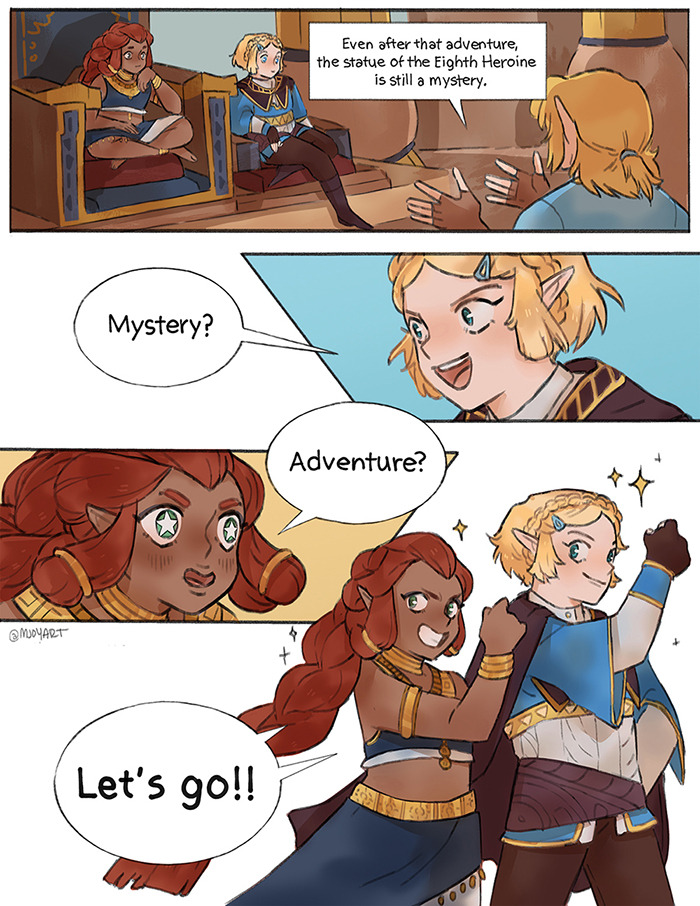 This comic was drawn by Meghan Joy (@mjoyart on Twitter) and written by me, Kathryn Hemmann (@kathrynthehuman on Twitter).

Here’s to strong friendships and new discoveries in 2020!

Also… Nintendo, I do not ask for much, but please give these two characters their own game!