This comic is based on a marvelous illustration of Ceres and Weive created by @l-a-l-o-u on Tumblr. You can see the piece in all its colorful glory (here).

I’m going to use this illustration as the cover for the second story arc of The Demon King, which I plan to start posting on AO3 beginning on August 1. Being able to work on collaborative illustrations and my own silly comics fills me with inspiration, and I’m excited to share the next segment of the story!

I saw a screencap of (this tweet) circulating on Tumblr after watching the recent teaser trailer for the Breath of the Wild sequel, and this is where my mind immediately went. People in the Legend of Zelda fandom say that they want “hot dad Ganon,” but be careful what you wish for!

I’d like to extend my sincere gratitude to Frankiesbugs for putting up with my awful dad humor and drawing this silly comic. You can find more of the artist’s cute and creepy comics and illustrations on Instagram, on Tumblr, and on DeviantArt.

After Nintendo premiered the new Breath of the Wild sequel trailer during E3, all sorts of artists rushed to draw illustrations of the mysterious hero in the sky, but all I can think about when I see these handsome young men is how Link canonically eats bugs. In this house we love our feral son, and I couldn’t resist drawing the Ponyo meme.

Gin and cranberry juice is a healthy way to start a magical day.

Ceres is my take on magical video game princesses, and it is my headcanon that all of these ladies are consummate day drinkers. I think you’d probably have to be in order to summon the emotional fortitude to deal with the shenanigans of heroes and villains on top of the everyday business of running a moderately large kingdom.

This is my take on the viral Matt Bors comic. Someone actually said this to me about two years ago, and since then their comment has been living in my head rent-free. With this comic I hereby evict that unpleasantness and release it back into the wild.

I started drawing this comic earlier this year and finished it just to get it out of my drafts folder. In the time since I completed the line art, I made a firm decision to limit the negativity I post on social media. To be honest, most of the experiences that have had a major impact on my life during the past several years have been negative, but I’m not sure there’s any real use or meaning in representing them directly through autobiographical essays and comics. Instead, I’ve found much more satisfaction and catharsis in constructing analogies through the medium of fiction.

Also, I think there are a not insignificant number of people in the world (including the “yet you have a job” person) who tend to latch onto negativity to make bad-faith arguments about topics that could benefit from more nuance. Now that I’m at a stage of my life where I’m considering working on more collaborative projects, I’d prefer to keep that sort of interpersonal drama to a minimum. Thankfully, I’m in a better place now than I was when I started drawing this comic, and I hope the person who wrote this in response to one of my essays is in a better place too.

It is an anime truism that a villain is evil in direct proportion to how stylish and attractive they are.

We can therefore infer that Balthazar is neither good nor evil, as he is not particularly attractive and wears the high fantasy equivalent of a track suit jacket over pajamas. 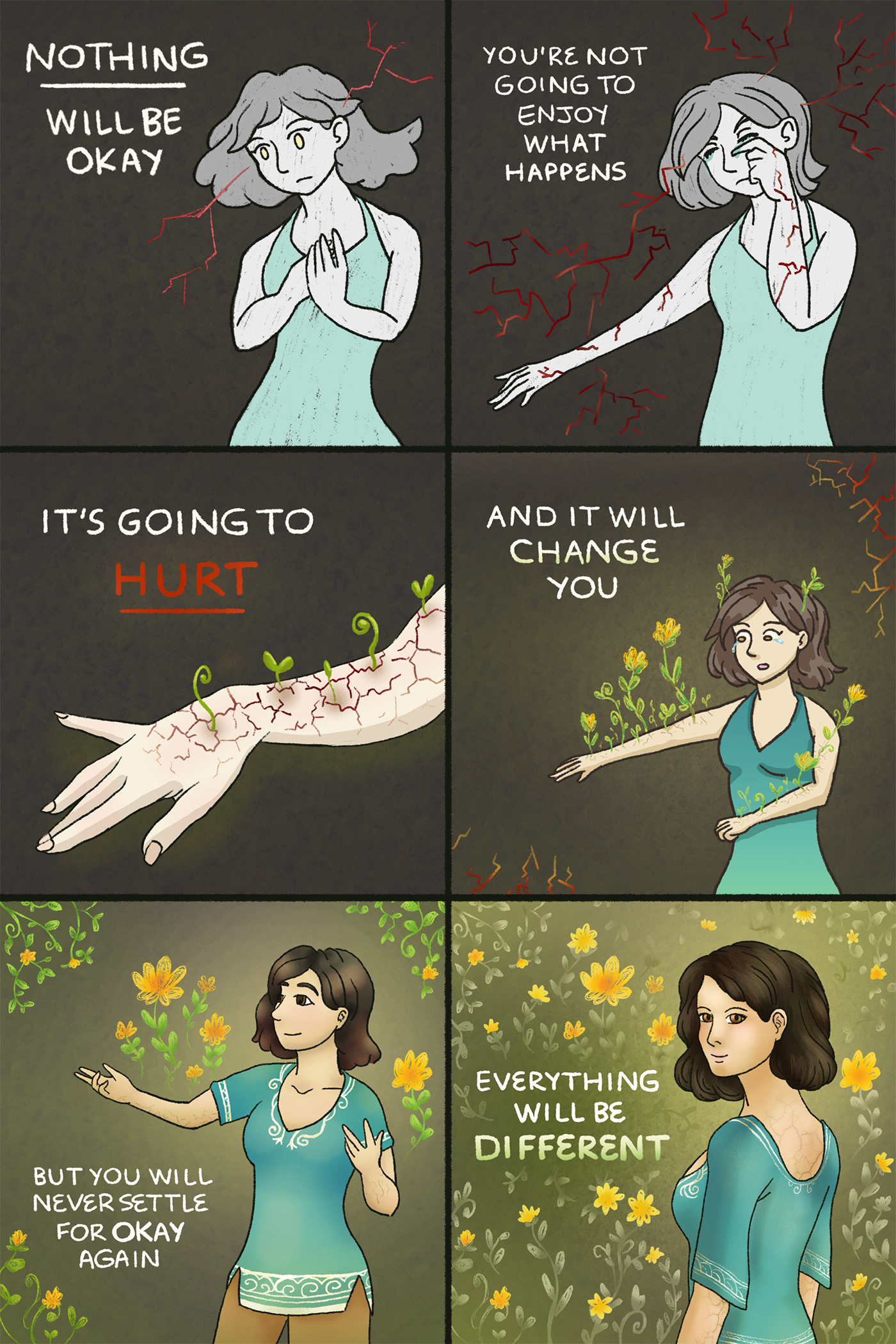 This comic is about how trauma isn’t just something that someone “overcomes” on the road to personal character development, but rather a significantly transformative experience with lingering aftereffects.

This comic is also about how significantly my art style has changed during the year after I left a traumatic workplace environment. It was an extremely difficult transition, but it’s important to create room to grow. 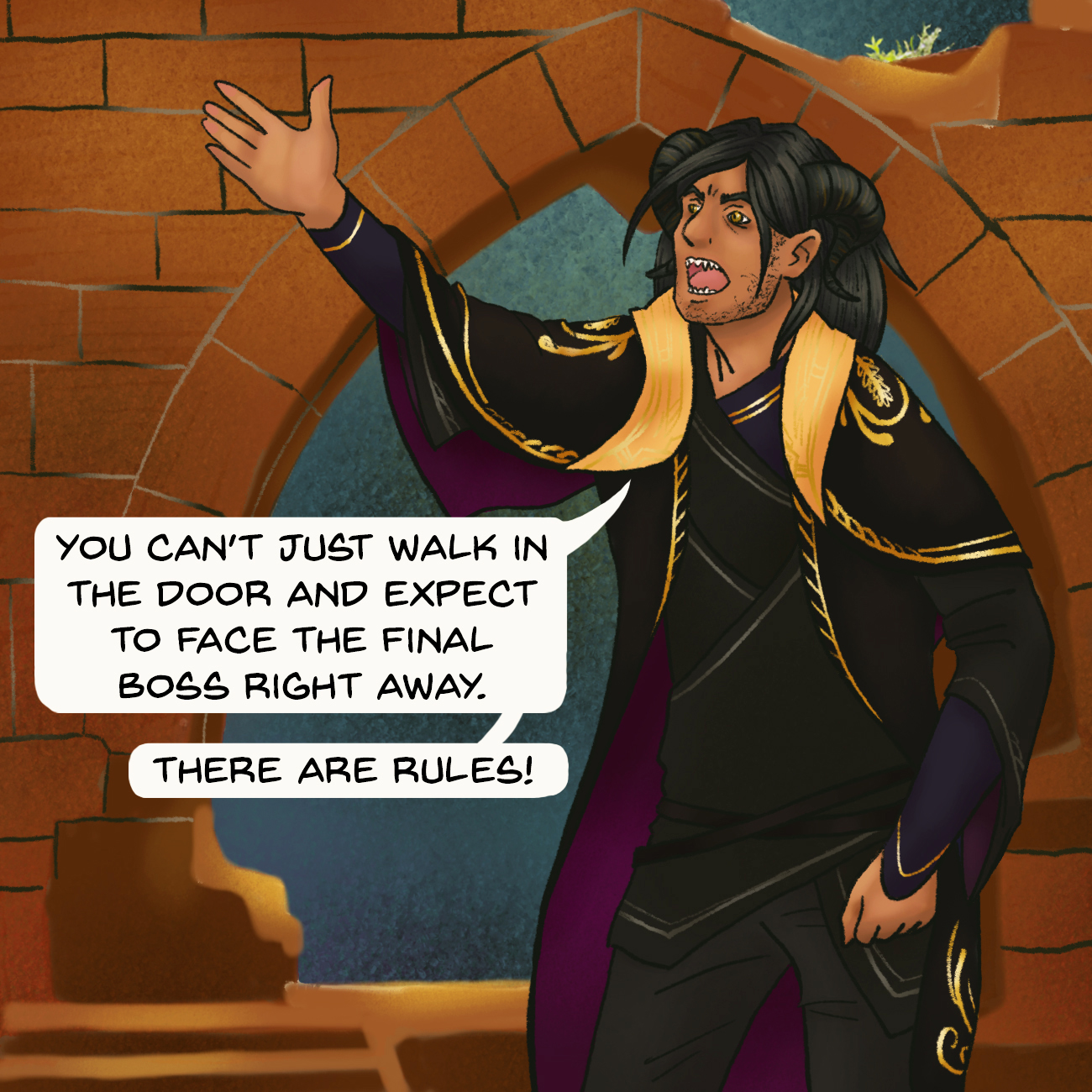 We live in a society.

Trying to apply real world logic to video games is a fool’s errand, but I don’t think it’s too much of a stretch to suggest that most of what “heroes” do is awfully close to war crimes.

…I write, having just spent two hours leveling up my JRPG adventuring party through wanton murder and environmental destruction. 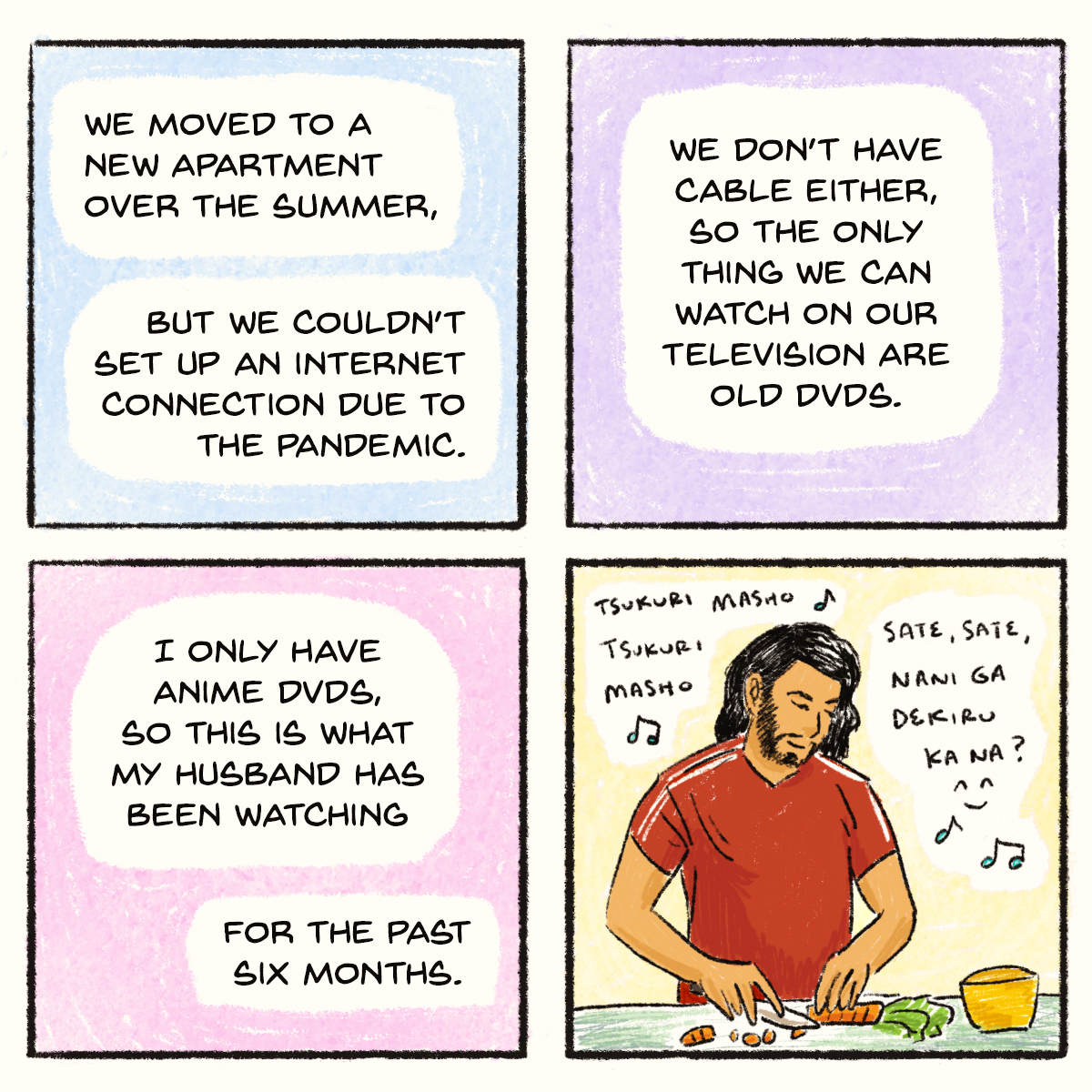 A true story from These Trying Times™

The song my husband is singing is (this one) from Azumanga Daioh.

“I would have just moved to another apartment,” someone commented when I posted this on Instagram. And I totally agree, but at the same time, moving during the COVID-19 pandemic wasn’t easy, and I don’t want to do it again. My illustrated piece of flash fiction “Apartment Hunting” (here) is actually about how strange and unpleasant this experience was. It’s been difficult to try to navigate my professional life without a stable internet connection, but at least I have a large library of anime to help me make it through.